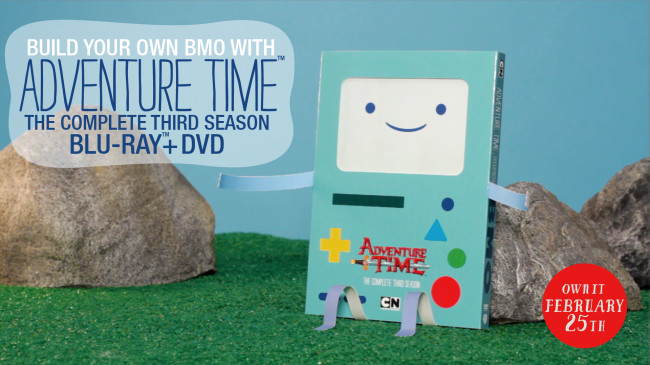 If you’re a fan of Adventure Time then get ready to celebrate the release of the complete third season on BluRay and DVD.  My nephew is a huge fan of the show so I’m sure he’ll be excited about picking it up.  Check out some clips from the season and find out more about the show below.

CLIP: “What Was Missing?” 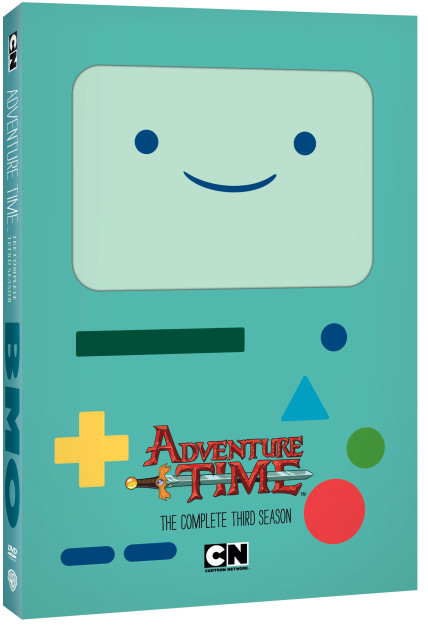 Available February 25, Release Contains More Than Four Hours of Episodes Plus Episode Commentaries for All 26 Episodes, an Interview with Pendleton Ward & Alternate Show Intro – All Packed Into a Custom, Collectible BMO Die-Cut Slipcase!

This February, Cartoon Network will release the third full-season installment of its most mathematical animated series on both Blu-ray™ and DVD as Adventure Time: The Complete Third Season hits retail. Continuing the franchise’s home entertainment momentum which has included a series of top-selling releases to date, the Blu-ray and DVD both feature all 26 episodes from the series’ third season, as well as must-have bonus features including episode commentaries for ALL 26 episodes, an interview with series creator Pendleton Ward, an alternate show introduction. Plus, further satiating even the most passionate Adventure Time fans, it’s BMO! Fans and collectors are in for a special treat with a custom die-cut BMO slipcase, which transforms the Blu-ray and DVD packaging into their very own collectible BMO figurine. Available on February 25 for the suggested retail price of $32.07 and $26.95 for Blu-ray and two-disc DVD, respectively.

READ  My Disney Side Home Celebration

“Adventure Time has become a phenomenon that has resonated with audiences of all ages – and we’re thrilled to keep up with the demand for full-season and Blu-ray sets for those most passionate fans with today’s announcement,” said Erik Resnick, vice president of Cartoon Network Enterprises, the home entertainment division of the network. “Our third full-season release will bring more of what Adventure Time fans love about these collectible sets: hours of their favorite episodes bundled with great bonus features created for fans by the show team, all in unique, collectible packaging.”

As one of Cartoon Network’s most popular series, Adventure Time continues to grow and thrive since its on-air debut in April 2010. With strong on-air success through its fifth season, critical acclaim, passionate fan base and strong consumer products program, the brand has become a massive hit among audiences of all ages. During its fifth season, the series was the #1 show among boys 6-11, as well as a top-rated show among kids 6-11, and kids and boys 9-14, according to Nielson Media Research. With a huge social following of more than 10 million fans on Facebook, Adventure Time consistently ranks as a top digital brand as well, with top-rated apps and online games featured on CartoonNetwork.com. Additionally, the Adventure Time consumer products program attempts to satiate the fan base’s desire to interact with their favorite characters with a robust licensing program that includes toys, apparel, publishing, accessories, interactive games, youth electronics, comic books, posters and much more. Some recent successes for the brand range from the Adventure Time Encyclopaedia from Abrams Publishing debuting on the New York Times Best Sellers list this summer to the monthly comic book line from Boom Studios winning the 2013 Eisner Award for Best Publication for Kids (Ages 8-12) at 25th annual Will Eisner Comic Industry Awards ceremony at Comic-Con.

From the mind of series creator Pendleton Ward and produced by Cartoon Network Studios, Adventure Time follows the unlikely heroes Finn and Jake, best buddies who traverse the mystical Land of Ooo and encounter its colorful inhabitants – and always find themselves in the middle of heart-pounding escapades. Finn, a silly kid with an awesome hat and Jake, a brassy dog with a big kind heart, depend on each other through thick and thin. The Land of Ooo is teeming with imposing mountains, lush green plains, accessible forests, ubiquitous prairies and winding rivers, the cities and towns are filled with bizarre characters in need of unique assistance. Whether it’s saving Princess Bubblegum, defeating zombie candy, mocking the “oxy-moronic” Ice King, or rocking out with undead music wiz Marceline the Vampire Queen, with Finn and Jake it’s always Adventure Time.

Cartoon Network (CartoonNetwork.com) is regularly the #1 U.S. television network in prime among boys 6-11 & 9-14. Currently seen in 99 million U.S. homes and 194 countries around the world, Cartoon Network is Turner Broadcasting System, Inc.’s ad-supported cable service now available in HD offering the best in original, acquired and classic entertainment for kids and families. In addition to Emmy-winning original programming and industry-leading digital apps and online games, Cartoon Network embraces key social issues affecting families with solution-oriented initiatives such as Stop Bullying: Speak Up and the Move It Movement.

Turner Broadcasting System, Inc., a Time Warner company, creates and programs branded news, entertainment, animation and young adult media environments on television and other platforms for consumers around the world.