My son is a huge Toy Story fan, at one point he owned every toy made from the franchise.  Last year he declared it was time to pass his beloved toys on to another child.  It was his version of Andy passing his toys on to Bonnie.  Honestly I was more sad that he was to see those toys packed up and donated.  Not that I am not a fan of donating, we do it at least twice a year to help keep things at a minimum.  It was like I was watching my own babies go off in the world.  Finding toys for a die-hard fan like my son was no easy feat.  Like the original claw machine we found used on Ebay after months of endless searching along with the remake from the Disney Store.  Spanish Buzz, Hawaiian Buzz, Woody, Jessie and Rex, and all the others he claimed he was just too old to hold on to.  Then came the announcement of Toy Story 4, followed by Toy Story That Time Forgot and slowly he’s been heading back towards his love of all things Toy Story. 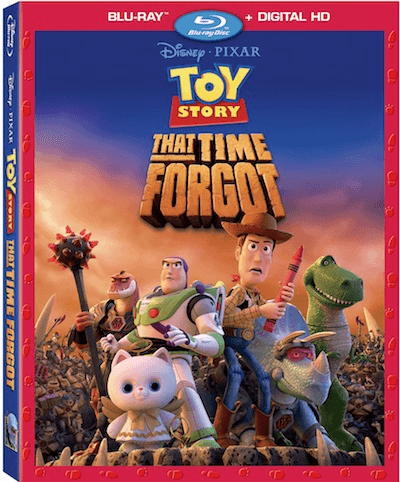 That Time Forgot was released last year on ABC as a Christmas Special.  It told the story about how toys get forgotten once kids open up new ones on Christmas morning.  Bonnie went to visit a friend and he had a new game system.  Instead of playing with his regular toys he was so consumed by the game he forgot about them.  Trixie had a major role in this story when she meets other dinosaurs and she ends up having to save all the other toys and get Bonnie and her friend to stop playing the video game and pick up their other toys.  I really love the realism of this movie.  My kids haven’t really started with video games yet but I do have nephews that are addicted to them.  They never really got into action figures and imaginative play toys.  This year my son’s Christmas wish list is filled with Toy Story toys.  I do admit that I cried looking at the list knowing I’ll have to invest in them again but it made me feel great that for at least another year my son is still into his action figures and he’s staying young at heart.

Toy Story That Time Forgot is going to be under our Christmas tree this year with my son’s name on it.  Thanks to Disney Home Entertainment.  He’ll be happy to own the Blu-ray to watch when ever he likes instead of waiting for it to come on television.  You can purchase you copy of Toy Story That Time Forgot on Blu-ray, Digital HD and DMA now.  Be sure to add it to your shopping list.

About Toy Story That Time Forgot

Disney•Pixar proudly presents a hilarious new animated “Toy Story” adventure. During one of Bonnie’s post-Christmas play dates, the “Toy Story” crew find themselves in uncharted territory when the coolest set of action figures ever turn out to be dangerously delusional.  It’s all up to Trixie, the triceratops, if the gang hopes to ever return to Bonnie’s room.  “Toy Story That Time Forgot” is an unforgettable tale packed with family fun and a must-have for every Pixar fan’s collection!

Reptillus!  – In this behind-the-scenes look at “Toy Story That Time Forgot,” the filmmakers share a peek at the origins of the Battlesaurs world and culture, and explain the character design and development of its greatest hero, Reptillus Maximus.

Toy Story Goes to Comic-Con – The “Toy Story that Time Forgot”team heads to San Diego to unveil the project to the public, led by their own longtime Comic-Con veterans, director Steve Purcell and head of story Derek Thompson.

Deleted Scenes with Intros & Outros – “Toy Story That Time Forgot”director, Steve Purcell, introduces scenes that were developed and storyboarded for the special, but were ultimately cut from the final version: