I can’t believe it’s been over a week since I was at D23 Expo soaking up all things Disney. When I received my invite to the expo I was super excited. I had learned that Marvel was planning on displaying costumes from Thor Ragnarok and Black Panther on the show room floor. There were so many amazing things we had the opportunity to experience I’m not sure where to begin.

It all started with my announcement post sharing that I was attending D23 Expo and my #D23ExpoOrBust photo. The tradition started in 2015 when bloggers attending shared photos of them shelves in their best Disney bound or favorite character costume. It was amazing. I picked Black Panther of course.

On two days of the expo, I also channeled Genie from Aladdin and The Queen of Hearts. The creativity of expo attendees was amazing. I can’t believe how elaborate some of the costumes were at the expo. It was amazing and made me feel comfortable with my costumes.

Walt Disney Archives: A Pirates Life For Me

During the expo we had a few special experiences, one was a guided tour through the Walt Disney Archives A Pirate Life For Me exhibit on the show room floor. We arrived at the expo extra early before it opened and got a behind the scenes look at the exhibit. We were also allowed to take photos which most people attending the expo wasn’t allowed to do.  I created an album with all the photos I took so you can see the costumes from the Pirates of the Caribbean Series, Descendants 2, Moana and so much more. 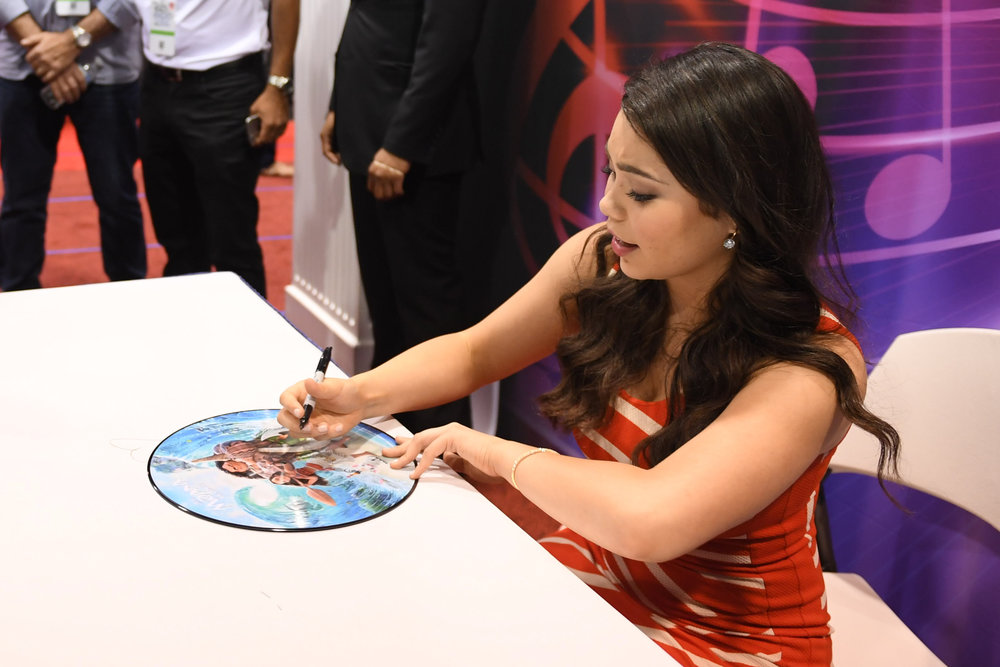 We stopped by the Disney Music Emporium pop up store on the show room floor to learn about the special limited edition music they had available for purchase at the expo. The Emporium also featured album signings by artists and award-winning composers. New releases included music from Marvel, Moana, Beauty and the Beast, and Disneyland attraction picture discs, plus lithographs, Crosely turntables, and posters.

We received gift bags special goodies including the newly released Robin Hood Collection. The Robin Hood Collection features the songs and score from the film on Disc 1, plus previously unreleased demos, and bonus tracks performed by Louis Prima on Disc 2. Also included are extensive liner notes by Disney historian and writer Paula Sigman-Lowery. The CD cover and 20-page booklet feature newly created artwork inspired by Robin Hood from Lorelay Bove, a visual development artist at Walt Disney Animation Studios (Tangled, Winnie the Pooh, Wreck-It Ralph). A limited quantity of lithographs featuring the back cover artwork designed by Bove will be a gift with purchase.

I was surprised at how good the food was at the expo. On our first day we had some trouble with the lines and figuring out what to eat but by the third day, we were pros. There were a collection of food trucks outdoors for anyone looking for a bite to eat in addition to all the options available on the show room floor.

There were tons of fun photo opportunities on the show room floor. We had the chance to take some neat photos at the expo. My favorites were these, but they are just a few. Attendees also took photos with each other to capture memories of all the awesome costumes and Disneybounding showcased.

We had the opportunity to chat with Michael Vargo – Vice President, D23: The Official Disney Fan Club and the Walt Disney Archives about all things D23. He shared about the expo with us and how much goes into planning each expo. It takes about two years to plan and execute each expo. The team at D23 also takes guest suggestions into consideration when planning each expo, they look at both good and bad feedback to see how they improve and what fans loved the most.

There is also #D23Expo in Japan. Next year Feb 2018 in Tokoyo is the next event

There are 22 discount offers for #D23 Gold Members at #D23Expo

If you’re interested in learning more about D23, the general membership is free and it’s super easy to join. Once you join you’ll get updates about all things Disney, including possible future D23 Expo events.

We were serenaded by Alan Menken during the last day of the expo. Fans were treated to an extra special showcase of songs from the famous composer. I couldn’t believe how many movies he had a hand in creating music for. I was shocked when I learned he was behind Little Shop of Horrors. I sang to my heart’s content during his presentation. He also confirmed a live action Little Mermaid was in the works with Lin Manuel Miranda.

Not playing with #Thor #thorragnarok #D23Expo

I Told Thor to Back Off

I was so excited when I saw posts with expo goers in the clip with Thor as Hulk and I couldn’t wait to give it a try. I wasn’t afraid to jump right in and let Thor know I wasn’t playing around with him. We were lucky the lines weren’t long when we visited to make our video but it was quite popular, along with the DuckTales Money Bin photo opp.

Be sure to check out all my other D23 related posts, including my Disney/Pixar Animation Panel, the Live Action Panel, and the Disney Parks Panel.